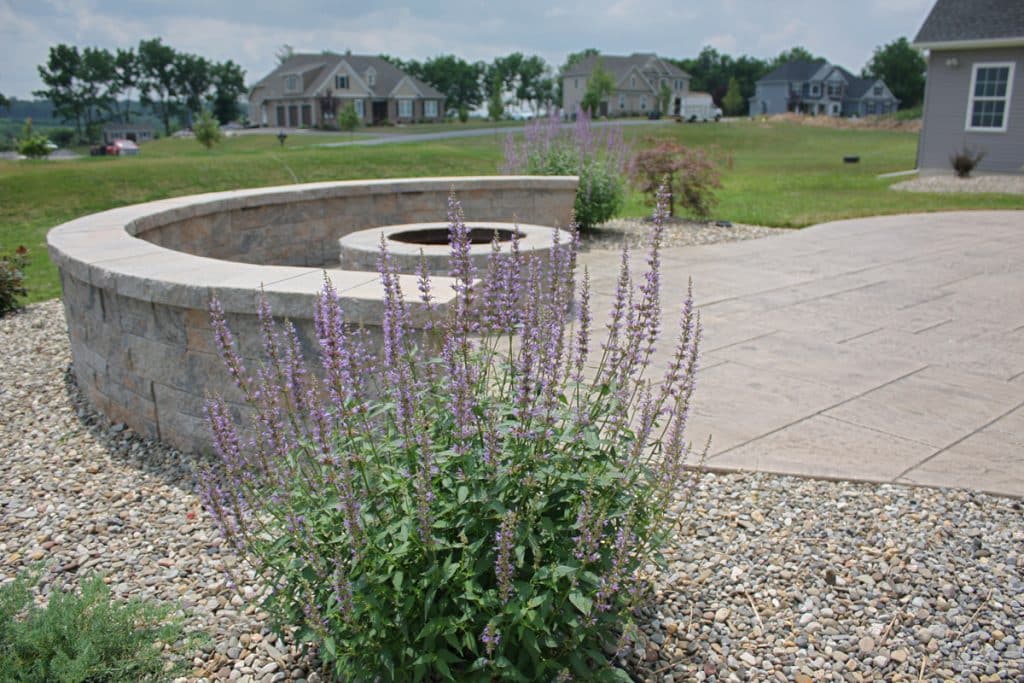 The backyard is a large blank slate with a slight pitch away from the house.  A septic mound lies at about 75’ out, directly in front of the main entrance to the backyard and blocks the view when standing at ground level.  A deck is enclosed between two sections of the house acts as a foyer area but also a sitting area to enjoy the outside.   There is a detached garage at the end of the driveway that has a door on the side that will need to be connected.

The backyard lies on the southern side of the house with nice view of the neighborhood and surround hillsides.  Northerly and westerly winds that affect this area of Nazareth are blocked from the house and the detached garage.

The deck steps end at a higher elevation than the nearby garage landing steps to the west, so the elevation change from the deck steps to that are is only a few inches lower.   The elevation to the eastern side by the bilco door is about double that.  There is gradual slope into the backyard towards the utility mound.

Our clients wanted to create a large patio space which would allow for entertainment for family, friends, and neighbors.  They wanted to create a nice spacious gathering area to use for dining that included an area for a firepit. They wanted to enclose the area with a seating wall but leave a gap in the middle that would allow for access to the yard.  They wanted the firepit to be centered with the middle of the deck.  During our initial meeting he showed a quick sketch he put together of how they imagined this but did not limit the design to that.

Our initial design showed two separate areas for dining and a fire pit area.  A third area was created to be used as a designated cooking area with a grill and possible table or kitchen.  We split the patio into two tiers to allow for some height adjustment and moved the fire pit to one side instead of center to create those two areas.  The idea behind moving the fire pit allowed for a nicer view that wasn’t in front of their utility mound.  We presented the design and the only major adjustment they requested was to make this into one tier instead of two. In order to achieve that then we had to remove a deck step from side garage door’s deck landing.

The patio would now be slightly elevated off the ground with three separate areas; one for cooking, one area for a firepit and another for the main dining or gathering area.   We also connected the patio space to the driveway and the detached garage with a 30’ serpentine walkway.

Landscape beds with colorful flowers tie in the patio to the house and garage.

Like most other patio layouts we do, we used curved lines with the patio and landscape beds.  Using curved lines in open spaces creates the space you need and makes the outdoor area more relaxed. 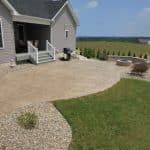 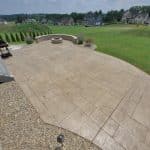 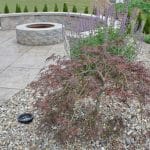 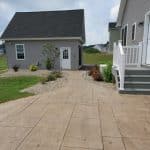 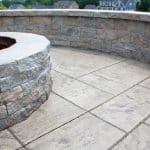 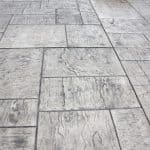 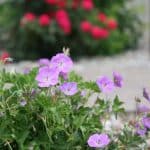 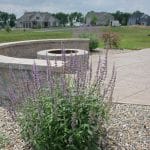 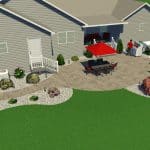 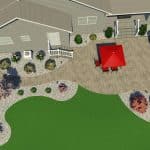 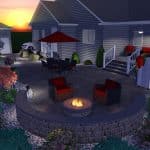 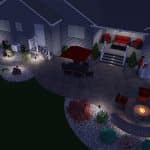 The patio was installed using a large slate stamp in a beige and gray color combination.  The height of the patio was built up pretty significantly on the southeaster side where the fire pit is, because of how far we went out.  The slope of the existing land there really dropped at about 20 feet away from the house.  We had to build up the area with stone and create larger landscape beds to accompany for this.  The great advantage of building this area higher than anticipated is that the septic mound that lies about 50 or so feet out, blends into the existing land and is not as noticeable from the patio.   The concrete patio feels more like an extension to their deck as opposed to a patio that lies below the deck.

The fire pit and wall were installed using Techo Bloc Mini Creta with a Valencia style fire pit.  The wood burning fire pit is filled with stone and the block is protected on the inside by a steel fire ring.

The landscape beds were mounded and sloped with topsoil and a layer of weed fabric is placed on top of the soil.  We then added smaller sized Delaware River Stone with plants to the beds to complete the unity from the house to the patio.   The plants included a Flowering Dogwood, Japanese Maple, Juniper, Azalea, Weigela’s, Roses, Hydrangea’s, Hyssop, and Geranium.

Landscape Lights in the wall and in the beds add the finishing touches.